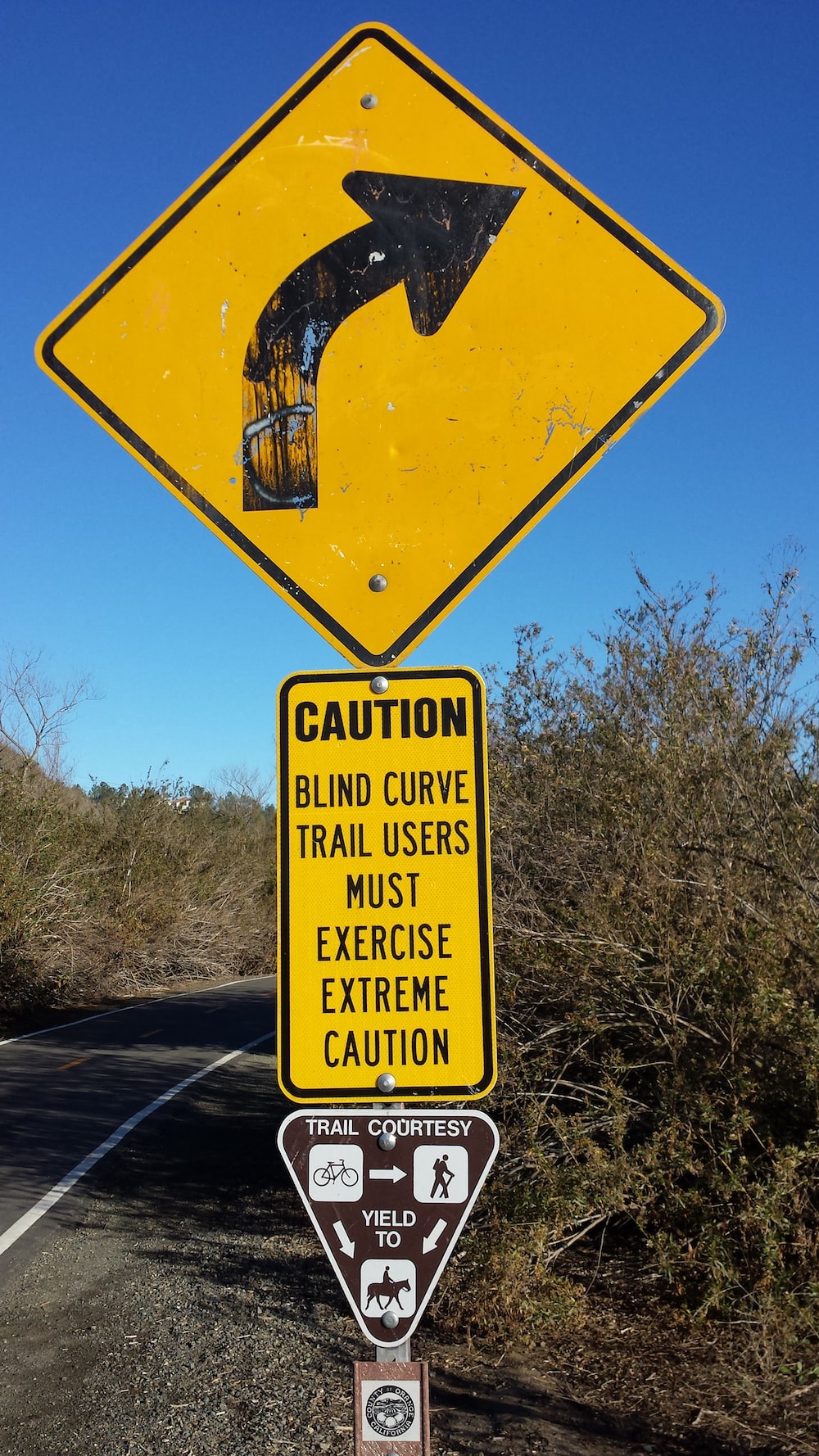 “Blind curve ahead, trail users exercise extreme caution”, says the sign. True, there are bushes in the way and you can’t see what might hit you if you don’t stay on the right side. Joggers don’t want to smash into speeding bikes, or vice versa! There might be other joggers, skateboarders, or even a coyote or bobcat… The asphalt trail is also open to maintenance vehicles, which would be more dangerous indeed. Caution is a must.

I’d never seen such warnings on a trail before, but I had run into them on highways plenty of times. All the same, it’s pretty obvious you shouldn’t switch lanes on a two-lane road when you can’t see whether traffic is coming in the opposite direction!

In the case of the road or path, a blind curve is a warning sign in itself, telling us to prepare to avoid an undesirable accident. 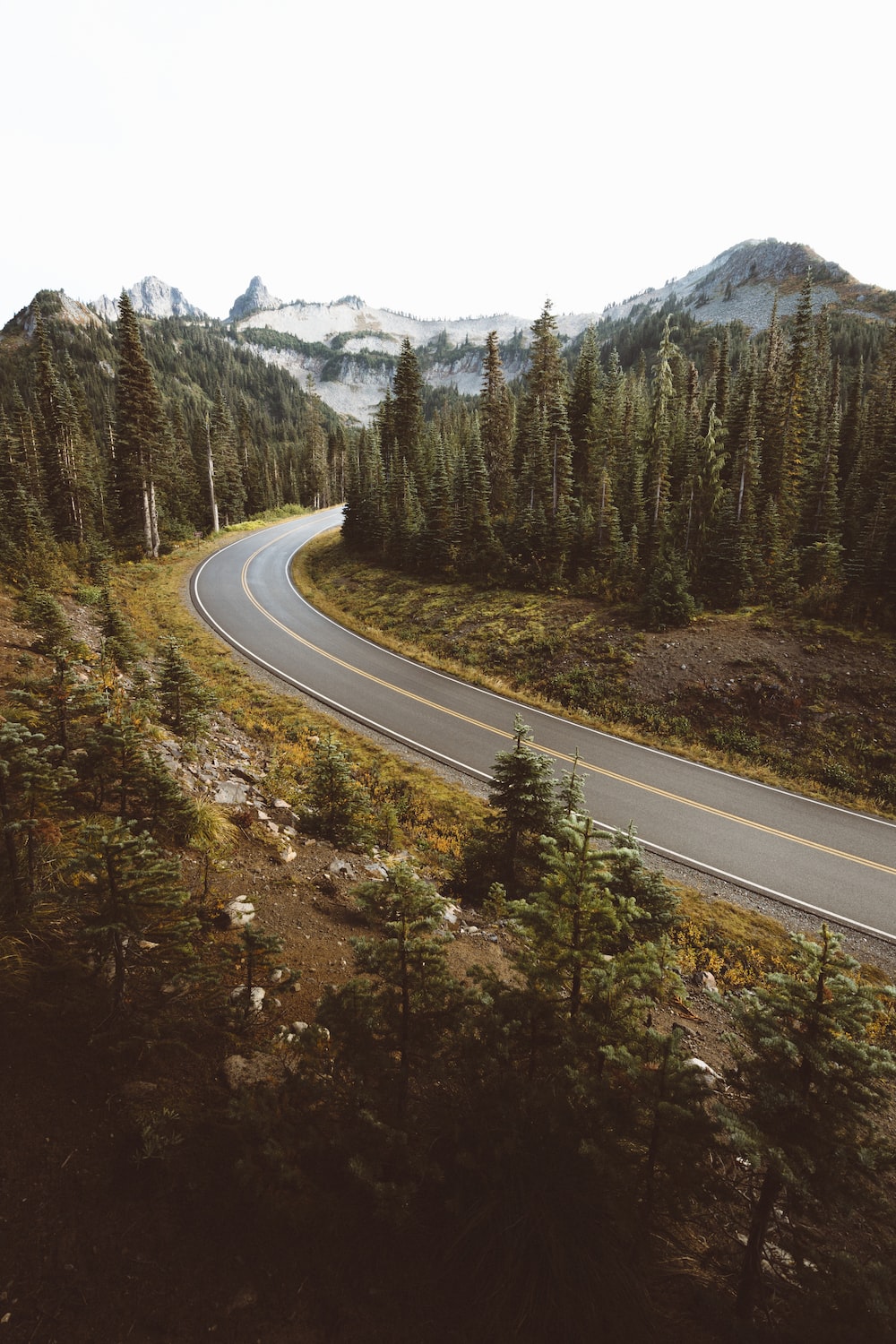 But what about those blind curves in life? Don’t you wish there were warning signs? A lot of times it doesn’t happen. Bam! You run right into things like “It’s cancer”, or “He up and died”, or “She left me”. Just in case, should we always “stay in the right lane”? It helps, but doesn’t guarantee zero accidents.

And as for those difficult things that cannot be predicted, sometimes there are warning signs we didn’t pay attention to. Flooding is predicted and we stubbornly stayed put. We kept eating the same junk and had a heart attack. In relationships, there are usually at least hints of failure before things blow. In all these things, ideally, we stop and take note, then prepare to avoid the worst.

But “curve ahead” doesn’t necessarily mean to be on guard for the worst. It can also represent an anticipation of the unexpected, which can be exciting, too. 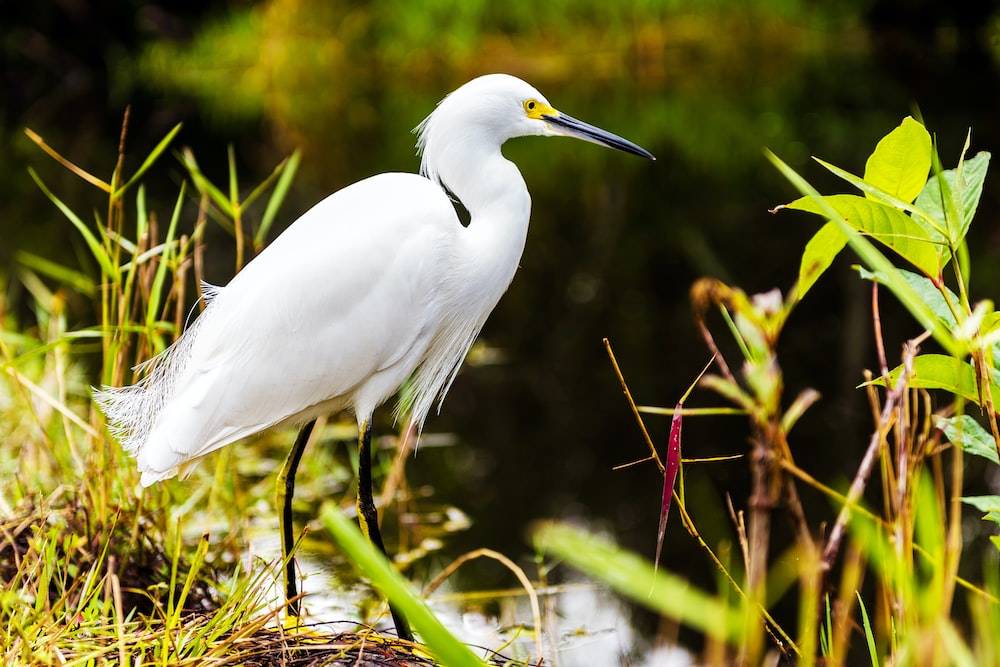 On the trail, I may come across an elegant white heron, or a sudden glimpse of the setting sun. Certainly, each day brings countless delightful surprises and not only the occasional tragedy.

As she contemplated changes in her life, the fictional character Anne of Green Gables pondered on what might be ahead: “When I left Queen’s my future seemed to stretch out before me like a straight road. I thought I could see along it for many a milestone. Now there is a bend in it; I don’t know what lies around the bend, but I’m going to believe that the best does. It has a fascination of its own, that bend. I wonder how the road beyond it goes—what there is of green glory and soft, checkered light and shadows—what new landscapes—what new beauties—what curves and hills and valleys further on.” 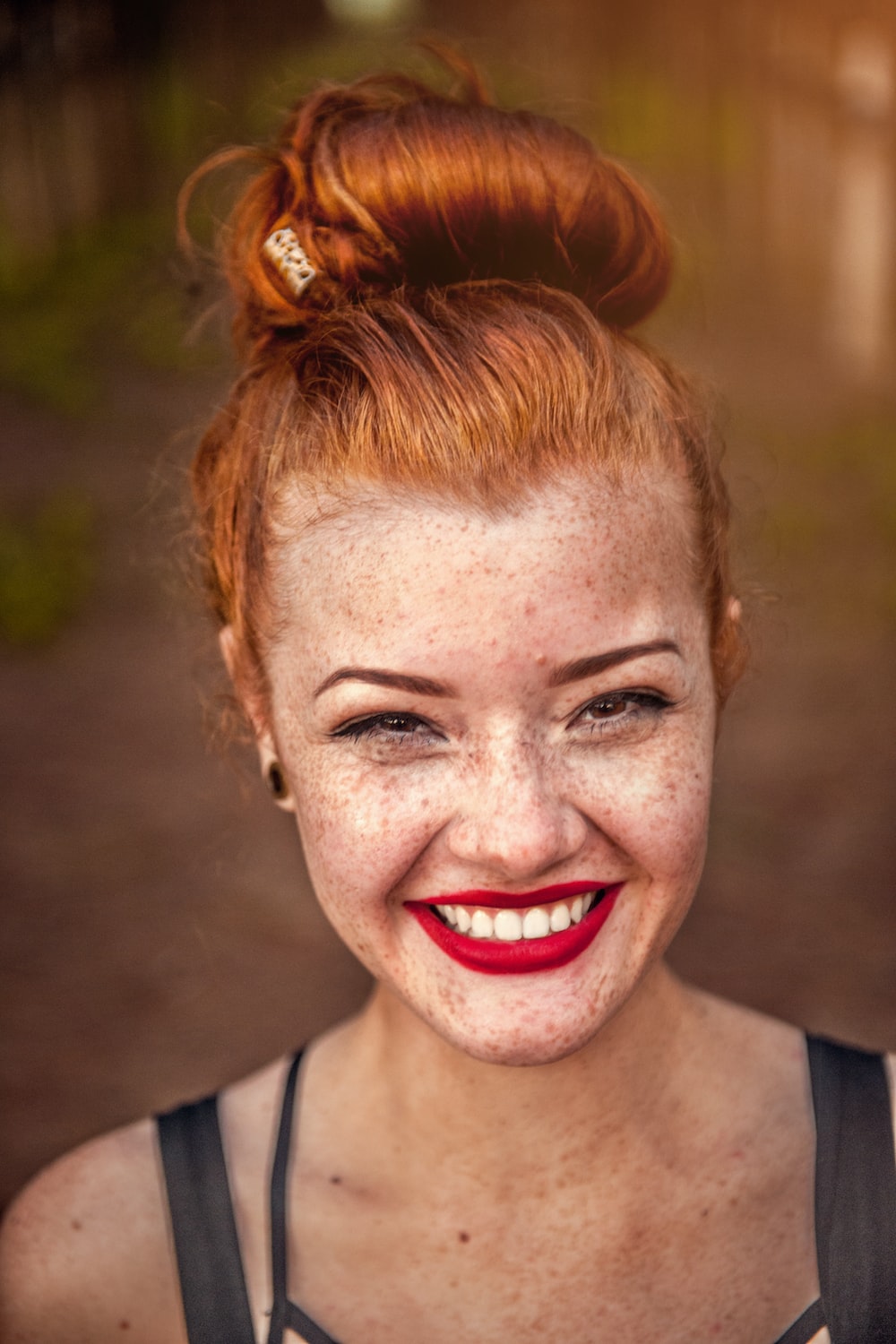 Knowing Anne, she is an optimist. In our youth, we often face the unknown future with excitement and anticipation. As the years go by, we tend to grow more wary. Those bends in the road seem constant, and fear often imagines the worst ahead. At the same time, hopefully we have dreams of new opportunities and accomplishments. The unseen has that attraction of the endless possibilities it may hold. Let’s choose to recapture that emotion, that hope-filled focus on the future.

For me there are great spiritual lessons as I consider “the bend in the road”.

Remember: Life is a path 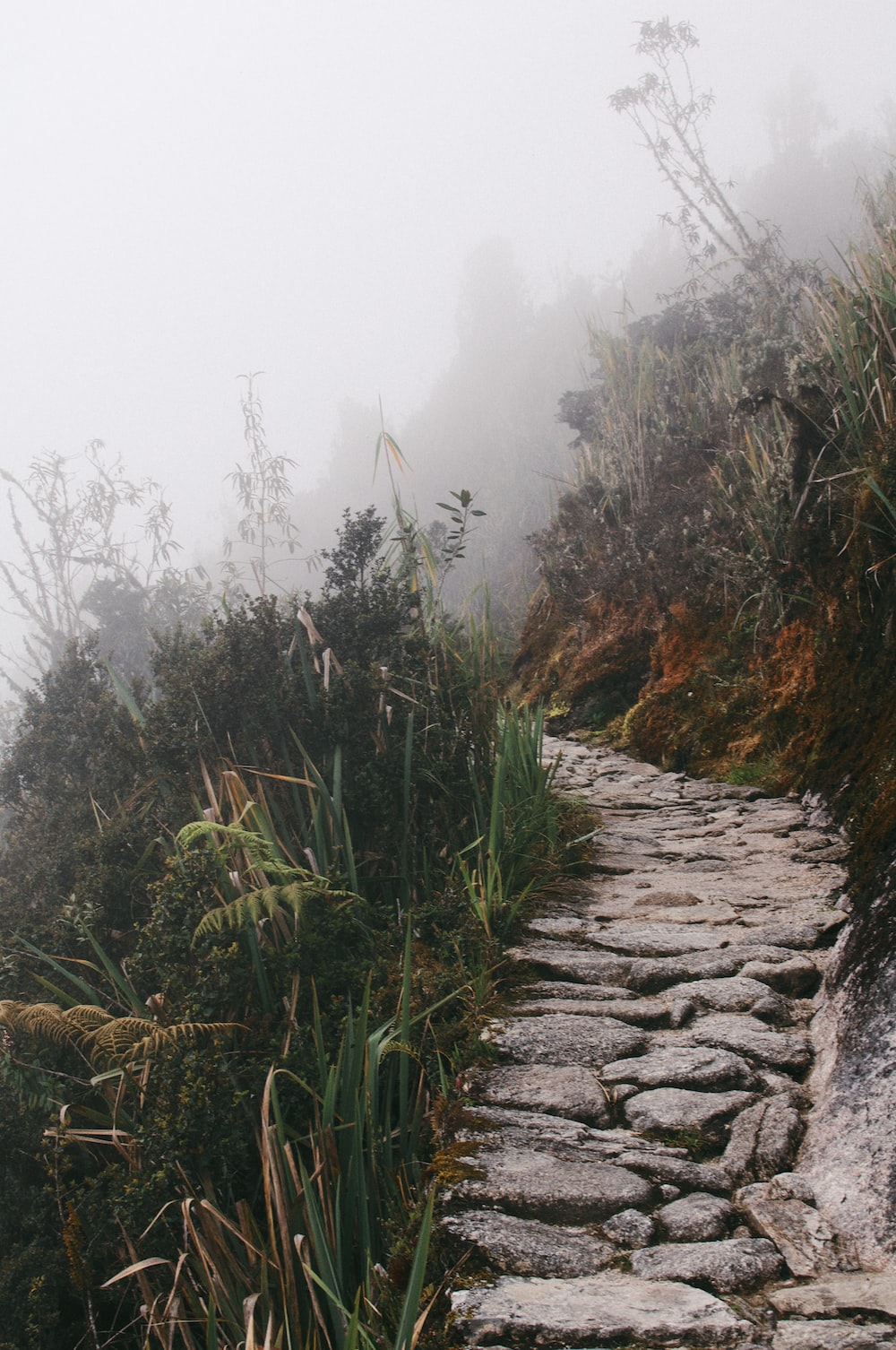 Life is a path, and knowing the One who said “I am the Way” (John 14:6) will help us as we travel upon it, blind curves and all. He not only shows us the path (as many spiritual leaders claim to do), but in fact he is the Path!

Besides the way to the Father and to eternal life, Christ longs to be the path we choose to guide our whole lives. Choosing him and following his guidance keeps us “on the right side of the path”, where some major accidents can be avoided. His Word offers both warnings to heed and directions to follow. 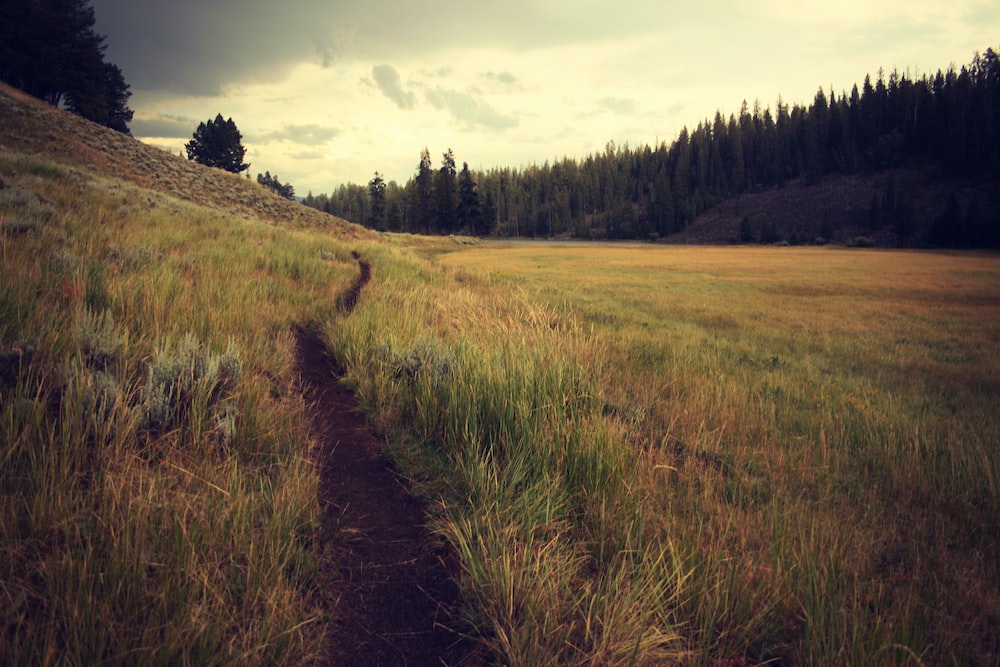 Scripture points out the dangers of taking the wide, easy path, just following the crowd. I think of an ad that said basically, “If it were easy, everyone would do it!” Do we really want to “go with the flow” when it leads to eventual catastrophe, or are we willing to “go against the flow” and find the life that really matters? Robert Frost’s famous words about the “path less taken” echo the Biblical concept, and he expressed gratitude that he had chosen it. The narrow path, the one Christ offers, may be lonelier and tougher at times, but is less crowded, and you know your final destination! 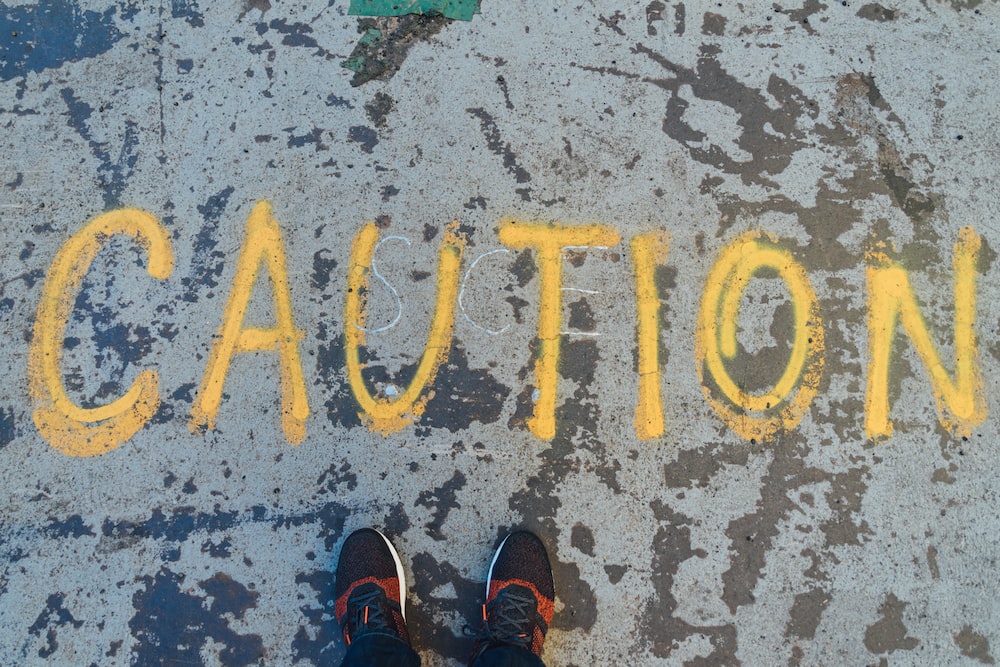 On the trail of life, exercise precaution. Knowing the One who says “I am the Path” will prepare us for those blind curves, whether they involve an accident or an opportunity ahead. At the same time, let’s live with anticipation, sure above all that, even if we suffer injuries on the way, our final destination is worth it all! 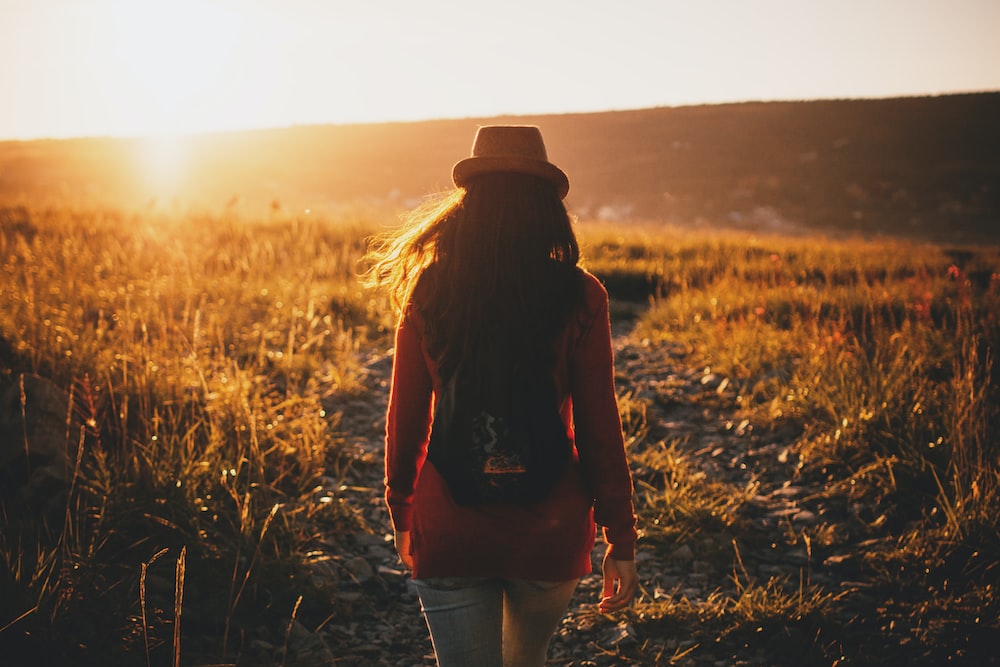 For those who choose that Path, we are never alone. Jesus is our invisible companion and the Holy Spirit whispers directions and encouragement. Let’s keep our spiritual ears open to that voice. This spirit is often contrasted to our selfish and sometimes all too pleasure-oriented sin nature. Listen to those sometimes barely-noticed nudges that say, “Do this; go there”, and that mean a special blessing to you and others.

A friend’s brother had been in jail for years and we had been praying for him. Some Christians had reached out to him there and helped him find the Path. Just when he unexpectedly was allowed to be free, his sister wanted to have a “thanksgiving service” of sorts in her home. We had tickets to a concert and “couldn’t go”. Suddenly it hit me that we could give someone else our tickets and avoid missing out on a unique celebration! There’s no doubt where that inner realization came from. The gathering we attended was much smaller and inconsequential from a human standpoint, but much more significant and joyful from an eternal one.

Whether you turn to the right or to the left, your ears will hear a voice behind you, saying, “This is the way; walk in it” (Isaiah 30:21). 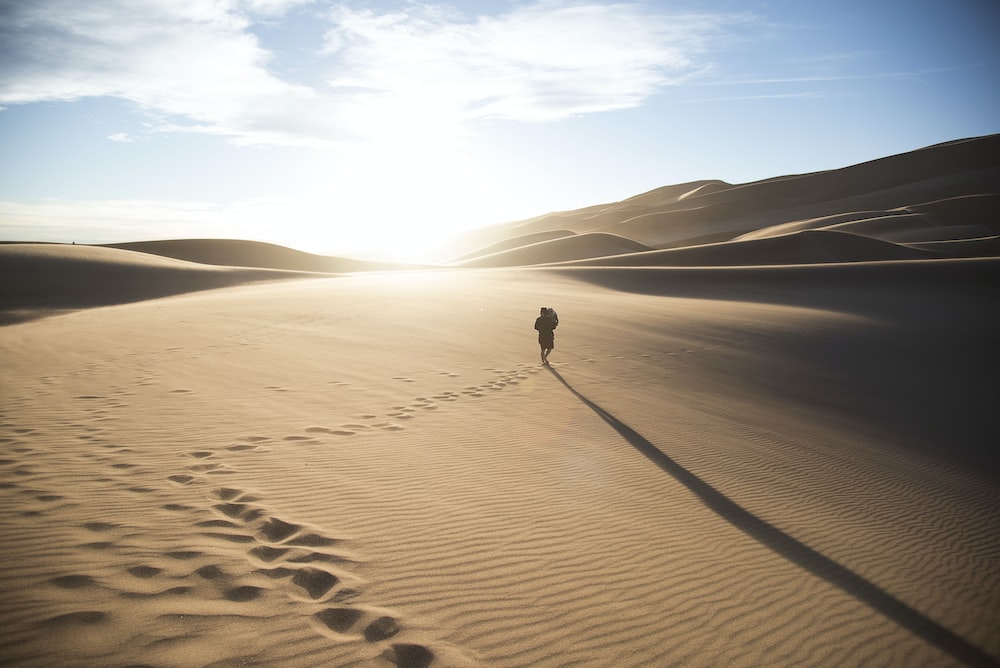 The ultimate faith-walker was the great patriarch Abraham, who heard God’s voice telling him to leave it all and head for an unknown destination. He set off by foot with his wife and livestock, eventually reaching the Promised Land. He believed God would make him the “father” of millions, even when he and Sarai were “too old” to be parents. Millennia later, the fruit of that faith and obedience is unquestionable.

That same Voice is able to guide today. My husband and I once turned down the opportunity to move to another country where he would have had more of a guaranteed job and income. That wasn’t our priority, and wasn’t where God was directing us. I have never regretted it.

If you are facing major curves ahead, an unknown destination, place yourself in those steady hands that will keep you on the right Path. I invite you also to check out what fellow-blogger Nancy Kay Grace has to say: